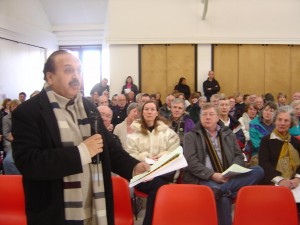 ban Hussain attended a meeting of the Keep East of Luton Green group to lend his support to their campaign to stop 1000’s of homes from being built on green belt land to the east of Luton.

“Myself and the Liberal Democrats strongly oppose the Government’s regional spatial strategy which would impose these homes on our green belt land.  It is simply wrong for central government to tell local people where homes in their community should go.

While there is a need for housing in community, it should be clear to all those who look at the proposed sites for development that all the housing needs for our town can be met without building  on our green belt land, whether it be to the east or west of Luton.”

The KEOLG meeting took place at the same time as a march between Caddington and Slip End which was campaigning to stop homes being built on the green belt land there. Unable to attend that event as well Cllr. Hussain contacted the march organisers to share the views regarding development to the west of Luton.

Further information: text of the email Qurban sent to the West of Luton march organisers:

Along with my Liberal Democrat colleagues, may I assure you that we strongly oppose the regional spatial strategy that would force the proposed 5,500 homes onto our community. Matters relating to housing belong with local communities instead of central government and we should always seek to protect green belt land.

While there is general agreement about the need for extra housing in Luton and the Luton South constituency, I firmly believe that the housing needs of our community can be met without building on the land between Luton, Caddington and Slip End.