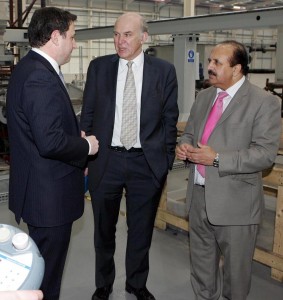 The Liberal Democrat Shadow Chancellor Dr Vince Cable MP has visited Luton South to learn more about green technology and discuss the impact the recession and banking crisis has had on local business.

Qurban Hussain said: “ Vince Cable was very impressed by the innovative work which Ecosheet are doing and the huge steps it makes to cutting waste and supporting the environment. Also, it is a great boost to the local economy and shows how Luton is set to be a world leader in the emerging green economy.” 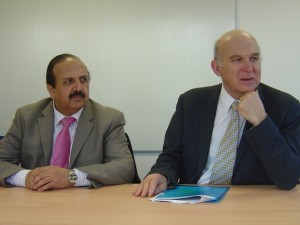 ed: “At a time when thousands of business people have seen good companies, the product of a lifetime’s work, forced to the wall it was good to see an innovative business that is succeeding in these difficult times.

“The government has to ensure that the economic conditions to prevent a double-dip recession are in place. We have to be sure that the private sector and companies like Ecosheet can grow, creating new jobs.

Economy on a dripfeed

“The economy is on a dripfeed. Labour may have helped put it in hospital, but proposals by the Conservative Shadow Chancellor George Osborne could kill the patient. With it so close between the Liberal Democrats and Labour here in Luton South today’s visit demonstrates why people need to get behind the hard working, local candidate they have in Qurban so they have an effective voice in Westminster on the issues that matter. ”