In an interview with the Luton and Dunstable Express Labour Luton South Prospective Parliamentary Candidate, Gavin Shuker, has refused to say that disgraced Labour MP Margaret Moran should resign.

from the Labour group on Luton Borough Council not calling for Ms. Moran to resign, Mr Shuker argued that while he understands “that people are frustrated with the situation” all he “can really do is do what I did to be selected”.

At a meeting of  Luton Borough Council in November 2009 Labour Councillors announced that they hoped that Ms. Moran would be part of the selection which has led to Mr. Shuker being the candidate for Luton South leading to questions of whether the disgraced MP was involved in the selection.

“I read the interview with Gavin Shuker with great interest. Mr. Shuker confirmed that our disgraced MP, Margaret Moran, has had no real contact with the Luton Labour Party since last summer. Does this mean she has not been in contact with Labour Councillors regarding problems with their constituents? 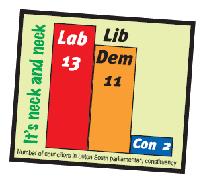 What I find most interesting though is that Mr Shuker says he can do nothing about people’s frustration and anger regarding Margaret Moran’s indefensible claim, but he can. Mr Shuker can do the right thing for Luton South by saying Margaret Moran should resign or be forced to resign immediately.

Our town and my fellow residents in Luton South deserve action on this issue and Mr Shuker’s comments clearly show that he is putting the Labour party before Luton South residents.

With the polls so close between Labour and the Liberal Democrats in Luton South it is now even more apparent that if people want to put our community first before the Labour party’s continued self-interest that they should support our campaign for real and lasting change.”