Liberal Democrat Leader Nick Clegg today called for a cross-party Council of Financial Stability to agree the timetable and scale of deficit reduction.

The sheer size of the deficit will require politicians to take a different approach to the challenges in public spending to avoid Greek-style social unrest, Nick Clegg said in his speech at the London Stock Exchange which was co-hosted by the WWF and CentreForum. 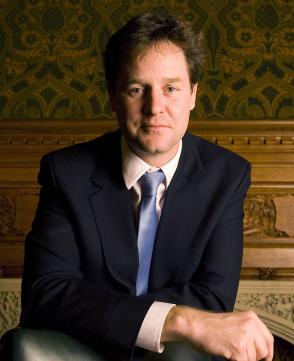 “Government-as-usual will not, cannot, command the legitimacy to make the big decisions before us. The scale of the changes required is so great it will require a different way of taking decisions too.

“The standard model, of Governments elected with a minority of popular support, cooking up fiscal plans behind closed doors in Whitehall, imposing cuts from on high is a recipe for Greek-style social and industrial strife.

“So we need to find new ways to arrive at decisions so that politicians put the long term national interest above their own short term interests and actively involve the public in the decisions taken.

“The Liberal Democrats would establish a cross party Council for Financial Stability.

“We would invite the economic spokespeople of all the major parties, the Governor of the Bank of England, and the Head of the Financial Services Authority to join the Council.

“The purpose would be to force the politicians to put the long term national interest ahead of their own narrow political interest, and agree the basic timetable and scale of deficit reduction in the years ahead.

“Agreeing that timetable according to sound economic tests, like those Vince Cable has already set out as a means of judging when to begin the process of fiscal contraction:

“The rate of growth; the level of unemployment; credit conditions; the extent of spare capacity in the economy; and the cost of Government borrowing.

“This would not prevent political parties from arguing about what changes should be made to taxes and in public spending, or which areas of taxation and spending should be immune from any change, but it would force the whole political class to come clean and tell the people of Britain what the scale of the changes actually will be.

“With a structural deficit now estimated at £80bn, and market confidence shaken by the unwillingness of the politicians to spell out what they’re committed to achieving, it is essential that politicians of all parties demonstrate that they will no longer play games with the stability of Britain’s long term financial reputation.

“Including the monetary and banking authorities will also allow for a more coherent debate about the interaction between monetary and fiscal policy. As well as the role of the financial services sector in underpinning, not undermining, growth.

“Crucially, given that the full elimination of the structural deficit will almost certainly take more than one parliament, an agreed approach on the overall scale and timetable of fiscal consolidation will provide both the British public and the markets with the assurance that a consistent and responsible approach will not be hijacked by politics in the future.”