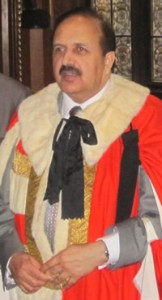 The formal introduction in to the House of Lords of the deputy leader of Luton Liberal Democrats, Qurban Hussain has taken place.

Lord Hussain was introduced to the House by Liberal Democrat peers Lord Rennard and Baroness Hussein-Ece at 2.24 on Tuesday afternoon with his proud family looking on.

He gave the solemn affirmation and an undertaking to abide by the code of conduct in a formal ceremony in which new peers Dame Joan Bakewell and Rachael Heyhoe-Flint were also introduced.

After the ceremony Qurban Hussain said;

“It is obviously a great honour to be chosen to represent my home town in the House of Lords. The introduction on Tuesday was very formal with robes and traditional proceedings. In the day to day business of the House I will be involved, with my colleagues on the Liberal Democrat benches, in carefully scrutinising government business.”

“There is another solemn undertaking which the House authorities do not ask you to give but I want say right from the start that I will do my best to represent all residents of Luton whatever their faith, colour or background. I am proud to count among my Luton friends and colleagues people of all faiths and none, people from many different racial and cultural backgrounds.”